You may not have heard of Engage as I write this article. Give it time, it’s got a big future.

I first came across Dr Jodi O’Dell, the creator of Engage, at the CIPD 2015 Conference in Manchester. She walked onto my stand as I was extolling my Executive Coaching and Leadership Development services. After showing me sample Engage reports I agreed to call her.

Some 12 months have passed and this article is a collection of my reflections/findings after using Engage with CEOs, directors and managers within a wide range of organisations. 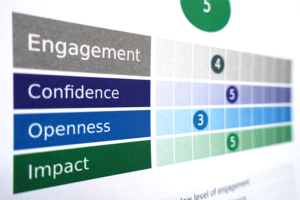 Dr Jodi O’Dell would describe Engage as a diagnostic tool driving development. It diagnoses an individual’s thoughts and beliefs across 15 scales summarised into three broad themes: Confidence, Openness and Impact. The three are added together to provide an overall Engagement score. The resulting reports provide feedback and questions to focus development. Examples of the fifteen scales include measuring self-belief, confidence relating to completing required tasks, social confidence, how adaptable and open to change an individual is, and rating perceived impact at work.

1. Engage is different, it’s about mind-set

The first thing that struck me was that Engage was different from other tools I’ve come across. As I’m level A & B (Personality & Ability) accredited I’m used to using psychometrics. Most of the tools out there report what might be perceived as visible externalised behaviours such as type or traits. These are generally considered to be fairly stable throughout our lives.

A personality trait test such as Big Five might point out my extroversion trait in that I like going out with friends and being energetic.

Both would be right.

Engage provides answers to these kinds of questions. The result is powerful new insight when coaching executives. 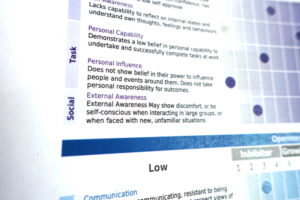 Mary, a director, gave me her Insight report (JTI/MBTI equivalent), and the output from her 360. Her type wasn’t a surprise, and the 360 useful to evidence certain positive and negative behaviours. What Engage added was her personal belief around the area of personal influence.

She’d scored herself very low, firmly within the inhibitor area. The result was a woman with significant responsibility yet not believing she could influence others to achieve outcomes. This was a key to much of her current challenges. I had the ‘in’ to work with her at a deep level, to address some of the core issues interfering with her performance, within minutes of the session starting.

Max was a charismatic CEO, exuding personal confidence. He had completed Engage the night before and his interest had been piqued. As I showed him his scores, he smiled. It’s as if Max thought he had taken a test, and had scored highly across the board. We focused on Self-Awareness. He’d scored himself as a maximum ten, suggesting he demonstrated a high capability to reflect on internal states and understand his own thoughts, feelings and behaviours.

I began to explore this high score, gaining examples of where his self-awareness was indeed an accelerator to success. His ability to understand himself, to analyse all the factors before making decisions were all powerful accelerators.

We then touched on a potential derailer, “in extreme cases you may show quite strong tendencies towards being self-critical and over-analysing things, particularly, in relation to yourself. This type of distorted thinking is time consuming and can lead to negative thinking and rumination…”

The CEO sat aghast. “That’s my problem, right there…”

Using Engage is akin to taking a car to the garage, plugging it into a computer, and diagnosing what is right and wrong. Within minutes, I as the coach know where to focus my time and energy. 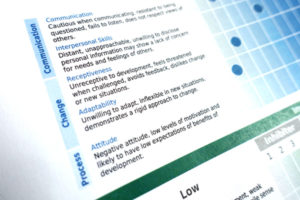 Chris, a CEO in a mid-market company, rated himself as low on the Adaptability scale. His answers suggested he was unwilling to adapt, that he was inflexible in new situations and that he demonstrated a rigid approach to change. In our session we explored what adaptability meant to him, and worked through some of the powerful questions raised within the Engage Self Development Report. It brought powerful insight into not only his own thinking, but how his potential lack of adaptability affected his board and employees.

Very low scores (what Engage describes as Inhibitors) can act as a red warning light to the coach, suggesting a more careful supportive approach is required. Getting the balance right between support and challenge is not easy. Other than gut feel, how can we know when to slow down and spend more time encouraging, and when to push forward and challenge?

In more than one instance, despite how the CEO presented themselves, Engage has shown a somewhat vulnerable CEO close to breaking point. In these instances Engage would often show very low self-confidence combined with a very high productivity orientation. The result is someone who believes they are not good enough, and tries very hard to prove they are. Surely a formula for increasing levels of stress, increased likelihood of burnout, and reduced effectiveness.

Engage’s recommendation was to be gentle with these CEOs.

As a result, my approach (with pointers from the Engage Report) was to focus on those areas where CEOs were doing well, review positive results, and build a list of what they were doing right. In one particular instance the coachee told me I was the first person in three years to encourage and support them in their role. In that whole time not one person (including the CEO of a global board) had provided feedback or encouragement. No wonder he was close to breaking point!

Without Engage, I would most likely have been overly challenging and missed an opportunity to provide the CEO what he really needed.

As I’ve already intimated, Engage provides specific, detailed feedback, guidance and questions tailored to how the candidate scored themselves across fifteen scales.

A strength of this approach is that those giving feedback do not need to be psychologically trained (for example, those without Level A&B (Personality and Ability) accreditation), as the reports provide for a robust approach to working with the scales in a safe, yet deep, way.

The way I have been using the scale feedback and questions is that within a coaching session, I will draw on one or more of the scales relevant to the coaching theme being explored.

Together we work through some of the key feedback points, and pick one or two ‘power’ questions from the report the coachee feels are particularly relevant. This approach actually augments coaching, as it ensures the coachee is addressing those issues they themselves feel are right for them.

After exploration of one or two scales, and where appropriate, I ask the coachee to work through the rest of feedback and questions for that particular scale between sessions. I ask them to complete the Engage Personal Development Plan (towards the back of the reports) to capture their key reflections, actions, learning etc.

Experienced/qualified Executive Coaches will work with Engage in their own way. For those who are not as experienced or qualified, or those who don’t have a strong psychological underpinning to their practice, the Engage Reports allow the coach to work at a deeper level in a safe way.

As such, Engage supports both experienced coaches, as well as those newer to the field of development. It suits those organisations seeking to implement coaching cultures as well as the range of L&D programmes found within larger organisations.

In every case, my coaching clients have been both surprised and powerfully impacted by Engage. In some cases it confirmed what they had known about themselves for some time. For other cases the results were surprising but on reflection entirely accurate.

One director, after scoring himself low on self-belief, opened up about his lack of self-belief and his efforts (through therapy) over the years to try to address it. What was interesting (and I’m speaking as a qualified therapist too), is that using the Engage feedback and resulting questions changed how he conceptualised himself. Through the process he was challenged to address his wrong thinking in relation to himself by looking at evidence of his self worth within his work context.

With each coachee there has been that sense of “yes, this is me” so necessary of any psychometric or diagnostic tool (otherwise known as face validity).

Therein lies the apparent power of the tool. It’s a self-assessment tool. Where a coachee may have a more critical mind set, and score themselves lower as a result, the results reflect their internal mind-set. In other instances individuals may score themselves higher. However individuals score themselves, it opens a powerful coaching conversation about them. 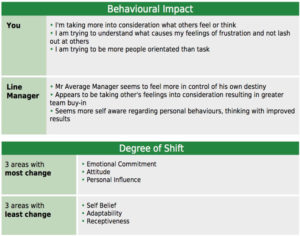 Another unique aspect of Engage is that I can now demonstrate the degree of shift as a result of Executive Coaching. After a period of, say, six months, asking my client to retake Engage provides an Impact Report, along with 180 feedback from a colleague. This is good news for those who seek to justify development interventions based on return on investment.

What a coach will look for is increased scores within inhibitor and growth areas, and potentially slightly lower scores where a client rated themselves very highly (as a result of becoming more aware of derailers).

The degree of shift can be measured not only at individual level, but also across teams/divisions or even across entire organisations. Imagine knowing a division scores low across openness to change and low on engagement scores. L&D managers now have robust measures for a start and end point, and can ensure development programmes focus on improving within these scales. These include not only executive coaching, but any development or change programmes. Something I think L&D professionals will salivate at.

My experience of using Engage within Executive Coaching has been eye opening. Within a ten minute online assessment, I gain a unique insight into a client’s internal mind-set, key areas for coaching are highlighted, my approach (support or challenge) is informed and I gain structure to which interventions to use. Engage is perceived as credible by the client (and supports between session work) and finally Engage demonstrates return on investment by measuring degree of shift over time.

Engage has become my tool of choice for all Executive Coaching. In fact, I was so blown away by Engage that I approached Dr Jodi O’Dell to see if I could join her to help take Engage to the world. I was delighted when she said yes. I’ve been the CEO since June 2016.

I hope that like me, you will give Engage a try.

To find out more I recommend the following:

A bit about me: A successful entrepreneur having started and sold my own highly successful business, I have a Masters in Leadership Coaching & Mentoring, am Level A&B accredited, and have a Post-Grad Certificate in Psychotherapy. I am passionate about helping people achieve their potential, with a particular focus on leadership. I’m now CEO at Engage Coach International, and still provide Executive Coaching to a select few.

Interested in accreditation? Check out our reviews, expert analysis and pricing;

Virtual Coach
Within just ten minutes employees will be focusing on what drives, as well as holds back, their personal performance. Fully guided and proven process.
Accreditation
Gain accreditation to use the powerful Engage toolset within feedback, coaching, workshops, teams and organisations.